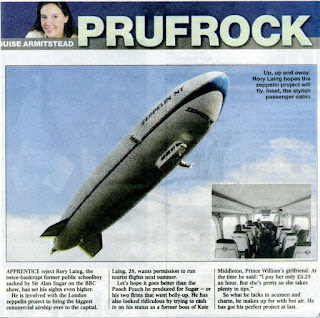 Alex and Brian Hall from Airshipventures mentioned already in a previous post are now actively posting quite a bit on their blog Airshipventures the first post of today is about the Zeppelin which is scheduled to be in London 2008, an article in the UK Sunday Times talks about the guy who wants to bring the Zeppelin to London, and ya the Times thinks airships fly with hot air, at least that's the impression you get from reading the article. The guy is supposed to be a "recent 'firing' from the UK equivalent of 'The Apprentice' TV" according to the article. Alex's comments are worth a read, check them out over at Airshipventures. But they didn't rest after that one Post, the also published a clarification post with the Title "Yes, we mean Zeppelin". To me it's clear what that means, Alex and Brian Hall are trying to get a Zeppelin NT over to the US, if they will just operate it or actually buy it, well I don't know but we sure will post about it when we find that out.
If you want us to report on your airship related news drop us an email or post a comment on the blog, we will for sure read everything you send us and consider it as a post. Check back tomorrow for more news from the airhsip business maybe from Airshipventures, but for sure from somewhere in the LTA industry.
posted by Andreas at 9:58 PM