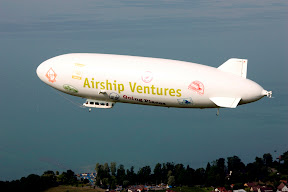 © ZLT
I know this Item is already a few days old and yes it has been almost a week since my last post, but the day job still take precedence. So as the Headline alludes the Zeppelin NT now has it's official Type Certificate for the US. After the approval of the Airworthiness Criteria in May 2008 the Zeppelin NT with the official type designation LZ N07-100 has now it's official type certification from the FAA. You can either go to that page and download the PDF or just continue reading the type certificate below or click here to read it. The Zeppelin NT is now the 22nd Airship with an FAA Type Certificate, here is a list of all of the airships. Zeppelin Luftschifftechnik has also issued a press release along with this milestone. This is the most important piece of the press release to continue reading jump down to the full text in English and German

The EASA is currently holding only 3 type certificates one of which is the Zeppelin NT jump down to read it or download the original PDF from the EASA.

While researching this I also found a better version of the Airworthiness Criteria: Airship Design Criteria for Zeppelin Luftschifftechnik GmbH Model LZ N07 Airship click here to read it. I have got this document from the Justia Regulations Tracker a great tool to get official government documents like this one.

PRESS RELEASE Zeppelin NT Airships receive FAA Authorization US market opened for Zeppelin NT airships Friedrichshafen, June, 26th 2008 – ZLT Zeppelin Luftschifftechnik GmbH & Co. KG receives the Type certificate for the Zeppelin NT from the Federal Aviation Administration, FAA. After successful negotiations with Airship Ventures Inc., the maiden flight of the Zeppelin NT sold to Airship Ventures and the FAA Type Certification, the US market is opened for the Zeppelin NT. The type certification for the Zeppelin NT has been successfully completed. The FAA has issued the type certificate. This type certificate is the basis for the timely start of Zeppelin NT operations in the US. “We received the type certification for one the most important aviation markets in the world,” said Thomas Brandt, CEO of ZLT, „this is a further very important step to the North American market.” Robert Gritzbach, Chief Engineer of ZLT commented: “An intensive process has been successfully concluded. The FAA has recognized the German-European certification requirements for modern airships in the Zeppelin NT category for commercial passenger transport, in an enduring public hearing process.” Airship Ventures is happy about the on time type certification and is already planning their fleet expansion in the USA. Alex Hall, Airship Ventures CEO, remarked: “We see a market for a further two or three Zeppelin NT airships in the US.” The Zeppelin NT has already conquered Germany and Japan. Its ability to perform multiple applications from passenger flights to various special missions are the convincing factor. Figures got the modern airship displays 13.500 flight hours and over 75.000 passengers since 2001. The newly finished Zeppelin NT (maiden flight on May 21st 2008) shows a number of technical improvements, amongst others are the reduced weight while increasing lift and the near doubling of airframe lifetime. ABOUT ZEPPELIN LUFTSCHIFFTECHNIK GMBH & CO. KG Zeppelin Luftschifftechnik GmbH & Co. KG, headquartered in historic Friedrichshafen, Germany, develops, manufactures and markets the Zeppelin NT, a modern lighter than air multi-purpose airship. Zeppelin NT airships are currently operating in Japan and Germany. In partnership with Deutsche Zeppelin-Reederei GmbH, a wholly owned subsidiary of Zeppelin Luftschifftechnik, a Zeppelin NT 07 has flown commercial air tours, advertising and scientific missions throughout Europe since 2001. FOR IMMEDIATE RELEASE Press-Contact: Kathrin Runge Deutsche Zeppelin-Reederei GmbH Allmannsweilerstrasse 132 D-88046 Friedrichshafen Tel.: +49 7541 5900 547 Fax.: +49 7541 5900 22547 presse@zeppelin-nt.de www.zeppelin-nt.de

I think that it is great that they got that kind of thing. I know that it is quite hard to get it specially for airships.

Thanks for the information. I’m really glad that you share your ideas about this. I must relay these ideas to my friends.

Quite helpful piece of writing, much thanks for this article.