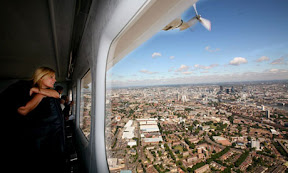 © The Guardian
I just got home from a long week in Farnborough (Yes the Airshow was fantastic) and did not have a chance to Blog until now, so there is a lot to catch up. Of course one of the Topics of this week in the media was the Zeppelin airship over London. Before we dive into the many many fantastic photo galleries I want to thank georgehorror for giving me permission to embed this video of the Zeppelin NT arriving in England. We featured a link to it earlier but now we can present you the embedded version. Enjoy!

The guardian known for their airship coverage in the last few month have a beautiful article online called Poetry in motion: over London by airship also featuring a good gallery with some unique pictures of the Zeppelin. The article was also featured in the July 15th Newspaper covering the full double sided (pages 18 and 19) of centre section, featuring the picture you see in this post.

Another outstanding article was published by metro.co.uk not for their writing but for the great video of the airship that they included, featuring an interview with the pilot and some great footage from the flight. Worth watching here.

Thanks to jim smith and Brian Hall for the link to the Telegraph gallery. Thanks to ARNOLD NAYLER for the pointer to the Flight International Article. Thanks to stella_cat for the link to the Londonist
Do you know of any other good articles, pictures or even videos of the Stella Artois "Star Over London" Zeppelin that is currently flying over London then send them to us via email or post the links in the comments section.
posted by Andreas at 10:02 PM