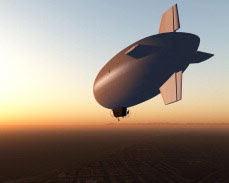 © BAE Systems
At the Farnborough Airshow that ended last sunday BAE Systems announced they are planning to integrate their existing Unmanned Autonomous Systems in the Lindstrand GA-22 Airhship. The GA-22 Airship was first supplied to the Ministry of Defense in Spain in 2004 and carried a 42kg load. Read the full press release below:

A 22 meter long airship, originally developed by balloonist and adventurer Per Lindstrand, could become the latest addition to BAE Systems growing portfolio of autonomous systems.

The GA22 airship, perfect for deployment into roles such as communications relay stations, will be updated and adapted to carry payloads, such as high tech surveillance equipment at up to 150 kilograms in weight, to heights of more than 6,500 feet

“Strategically, GA22 fits perfectly into the autonomous fleet that we are developing“said Richard Williams, Director of Civil Autonomous Systems at BAE Systems “The new vehicle has the possibility of opening up a range of markets for BAE Systems. It has a range of unique capabilities and we have identified a number of roles at major events, from sporting occasions to floods and forest fires, for which GA22 is ideal”.

BAE Systems designers and engineers have worked with Lindstrand Technologies to update the original design. GA22 will be able to carry high-tech surveillance equipment, including a payload of up to 150 kilograms, to heights of more than 6,500ft. In addition, it is being made from a newer and lighter material, which improves the airship’s performance. At the moment GA22 is radio controlled, but the plan is to make it fully autonomous.

Richard continued: “Even more exciting are the long-term prospects for success. I have no doubt that GA22 can make a significant contribution to our civil autonomous systems business,” Richard concludes.

The UK based Company of Per Lindstrand has specialized on Inflatable Structures, Tehtered balloons, and Lighter-Than-Air Vehicles. You can read a bit more about the GA-22 Airship on their website. Per Lindstrand also owns the GA-42 Airship the worlds first fly-by-wire that was introduced in 1980. If you want to have a look at the Type Certificate jump over to the FAA Website
posted by Andreas at 10:17 PM

Hey its been really a very good and informative post to read on. I will keep these points in my mind from now onwards, hope will not commit mistakes

Thanks so much for this article, quite effective piece of writing.