Skyship News - from Florida and beyond

The Skyship that is patrolling the Florida Keys has been featured on Fox News this week, check out the video below, if you want to read a bit more about it read our article on it here.

"I've certainly never worked with an airship before, but there are several areas of potential for persistent air surveillance -- longer than a helicopter and fixed-wing aircraft. And it certainly is economical."
and continues
"To me, the airship has the potential to make the cutters much more efficient. The airship is much higher, which expands the horizons and expands the eyes of the cutter."

A cutter is a classification of a US Coast Guard vessel that is over 65 feet in length. We wish the Airship Management Services Skyship all the luck and hope that the project is going to be a great success.

Another operation that was already successful was the mission in Trinidad & Tobago. Here is the impressive route the Skyship took to get from Miami Florida all the way down. Click on the map to see it in a larger size. 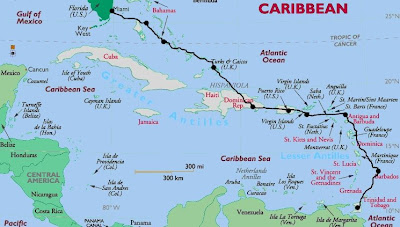 The Skyships have been around for a long time and they are here to stay which is great. We will talk about the Skyships and what they have been doing even in the 1980s already. Especially in reference to a certain other airship and what it is doing right now and will be doing soon.
To wrap up I want to treat you with a great picture of the Skyship 600 which can carry up to 12 passengers and has been around since 1984 (yes you read correctly). Click on the image for a larger size 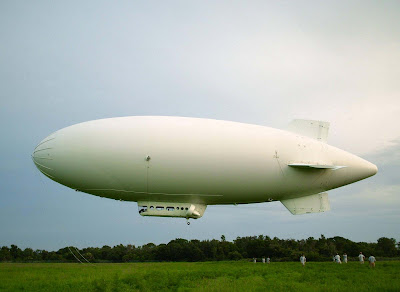 Thanks go out to George Spyrou from Airship Management Services for the Tip on the FOX news report and the pictures as well as Howard Gordon from Surveyor for the tip on the Article in the Miami Herald. We featured Howards little autonomous blimp earlier this year
posted by Andreas at 10:42 PM

Check out http://hybridairvehicles.net/,the renovated site of Hybrid Air Vehicles where you can check out the longest video shot of (at least the longest I have ever seen) the Skykitten

I didn't know but I saw in the news that a modern airship consists of an outer envelope that protects the inner one from the elements. The inner envelope actually contains the helium.

I would like to take one. Even Homer Simpson and Peter Griffin have taken one. I will take one.

I always find some interesting stories or lines in your blog posts. That is why I keep coming back, thanks.