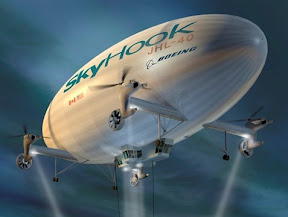 © Boeing
As nice as it is to write about the Zeppelin and other airship operations it is always nice to be able to report about something refreshingly new. Boeing and the Canadian Company Skyhook International supirsed yesterday with a press release that they are going to develop a heavy lift rotor craft. The concept called JHL-40 (Jess Heavy Lifter) named after the SkyHook president and COO Pete Jess. The 40 stands for a 40-ton (88 000 lb) lifting capability. The airship will have an envelope that will make it neutrally buoyant and 4 rotors that will be used to lift the cargo. Here is the full press release:

ST. LOUIS, July 08, 2008 -- The Boeing Company [NYSE: BA] and SkyHook International Inc. today announced a teaming agreement to develop the JHL-40 (Jess Heavy Lifter), a new commercial heavy-lift rotorcraft designed to address the limitations and expense of transporting equipment and materials in remote regions. Boeing has received the first increment of a multiyear contract from SkyHook to develop the new aircraft.

"SkyHook secured the patent for this neutrally buoyant aircraft and approached Boeing with the opportunity to develop and build the system," said Pat Donnelly, director of Advanced Rotorcraft Systems for Boeing. "We conducted a feasibility study and decided this opportunity is a perfect fit for Advanced Systems' technical capabilities."

The neutrally buoyant feature allows SkyHook to safely carry payloads unmatched by any rotorcraft in existence today. The helium-filled envelope is sized to support the weight of the vehicle and fuel without payload. With the empty weight of the aircraft supported by the envelope, the lift generated by four rotors is dedicated solely to lifting the payload, leaving the aircraft neutrally buoyant.

The SkyHook JHL-40 aircraft will be capable of lifting a 40-ton sling load and transporting it up to 200 miles without refueling in harsh environments such as the Canadian Arctic and Alaska. Currently, conventional land and water transportation methods in these undeveloped regions are inadequate, unreliable and costly. With its lifting capacity and range, the SkyHook JHL-40 aircraft changes that for a variety of industries around the world.

"There is a definite need for this technology. The list of customers waiting for SkyHook's services is extensive, and they enthusiastically support the development of the JHL-40," said Pete Jess, SkyHook president and chief operating officer. "Companies have suggested this new technology will enable them to modify their current operational strategy and begin working much sooner on projects that were thought to be 15 to 20 years away. This Boeing-SkyHook technology represents an environmentally acceptable solution for these companies' heavy-lift short-haul challenges, and it's the only way many projects will be able to progress economically."

The JHL-40 is environmentally acceptable because it mitigates the impact of building new roadways in remote areas, and Skyhook is expected to reduce the carbon footprint of the industrial projects it supports.

Boeing is designing and will fabricate two production prototypes of the JHL-40 at its Rotorcraft Systems facility in Ridley Park, Pa. Skyhook will own, maintain, operate and service all JHL-40 aircraft for customers worldwide. The new aircraft will enter commercial service as soon as it is certified by Transport Canada and the U.S. Federal Aviation Administration.

SkyHook International Inc. is a privately owned company located in Calgary, Alberta, Canada. SkyHook principals have been focused on providing solutions to logistical challenges in remote regions. They have a 30-year history in remote area operations and logistics in support of exploration, research and development in isolated regions of the world. For more information, visit www.skyhookinternational.com.
A unit of The Boeing Company, Boeing Integrated Defense Systems is one of the world's largest space and defense businesses specializing in innovative and capabilities-driven customer solutions. Headquartered in St. Louis, Boeing Integrated Defense Systems is a $32.1 billion business with 71,000 employees worldwide. 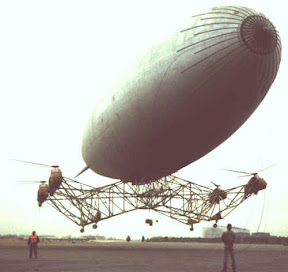 © Piasecki
Everyone with just a little experience in airships will be reminded of the Piasecki PA-97 Helistat which looks quite similar to the new JHL-40 project. This is also what the National Post pointed out in their article about this new aircraft. Unfortunately Piaseckis Helistat built in the 1980s under a US Navy contract was probably to early for it's time having 4 real Helicopter attached to an old Navy blimp envelope that was of no use anymore. The helicopters were controlled by a single pilot sitting in one of the helicopters controlling the others through a cable system. Check out the Wikipedia article on the Piasecki PA-97 Helistat the article also links to a video that shows some footage of the final catastrophic flight. Pessimists would proably argue because it didn't work back then it wont work today. But one has to realize the differences. The PA-97 was pieced together out of old pieces that were reused. It wasn't an aircraft designed from the ground up, without any electronic stabilization or computer assistance. Now over 20 years later the game has changed and if Boeing and Skyhook are developing this craft from the ground up I have no doubt that they will be successful. You should also check out the Skyhook International Website which has lots of pictures and additional information. I assume that the site will grow with time. 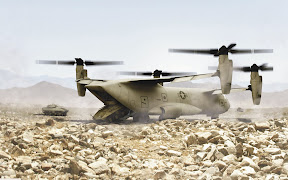 © Boeing
But let's have a closer look at the press release and read between the lines. The unit at Boeing that will work on this is the Integrated Defense Systems and in there the Rotorcraft Systems department. Looking at the aircrafts available one of them sticks out. The V-22 Osprey a tilt rotor aircraft that is quite unique in the world. Also read the Wikipedia article on the Osprey. Now why look at the Osprey and not at the Chinook? The Osprey can carry up to 15,000 lbs (6,147 kg) where as the Chinook can carry 26,000 lbs (11,794 kg). Well we now have to look for another clue in the press release. The acronym JHL-40. Sure the press release talks about "Jess heavy Lift" but is this really the whole truth? While reading an article about the Skyhook on gizmag.com I stumbled across this article that talks about a Quad TiltRotor (QTR) aircraft for the Joint Heavy Lift Programm of the US Army and there they are again our three letters JHL (Joint Heavy Lift) or (Jess Heavy Lift). According to Global Security.org

The Joint Vertical Aircraft Task Force is developing requirements to meet Army and Navy needs for a heavy lift transport rotorcraft that is expected to include, at a minimum, a 20-ton payload lift capability. The Army hasn’t settled on what kind of aircraft it envisions: it could be a quad tiltrotor, conventional helicopter, or a hybrid.

The last word in this introduction is key "hybrid". So an airship, quad tiltrotor hybrid ? It's possible. If you look at the first info of a QTR(quad tilt rotor) from Being it's probably this pressrelease where Boeing IDS is awarded the contract the QTR as part of the JHL program. And now we come full circle back to the Osprey since the QTR is a evolution pretty much using the technology of the Osprey. So 4 instead of 2 rotors let's say that doubles the lift then we get from 2 x 6,147 kg = 12294 kg or 12 tons or if we size it up and use the Chinook figures 2 x 11,794 kg = 23,588 or 23 tons which is above the limit of the 20-ton payload lift capability mentioned in the JHL program. But all these numbers are when using conventional technology. An Osprey actually has maximum vertical takeoff weight of 23,859 kg = 23 tons make it 4 rotors (2 Ospreys) and you have 40 tons. If you want to have those 40 tons as useful payload all you need to do is to neutralize the empty takeoff weight of the "2 Ospreys" which is roughly 20 tons. Considering the Zeppelin NT 07 has enough Helium to produce a raw lift of 7 tons without it's structure an airship envelope a bit bigger than twice the size should do it. So there you have it that's how you get to the JHL-40 it's all possible you just have to do the math. Of course this was really naive math and I am happy to get input from the professionals in the industry if they could chime in in the Forum or the comments on the Blog I am sure I have made mistakes or made incorrect assumptions or is it all sound. Send me your feedback positive as well as negative.

Thanks to hildy from the luftschiff_abt who pointed this story out first. Also thanks to Dan Nachbar for the thought on the Osprey and lvlta_designer from the Yahoo AirshipList for pointing me to the gizmag.com article that led me to the JHL stuff.
posted by Andreas at 11:43 PM

in February 1999, Lockheed announced their own concept for a heavy lift airship. It absolutely refered to tilt rotor technology, to be used. the little drawing they submitted, through Aviation Week and Space Technology, showed those tilt rotors.

anyway..."skyhook"?...gotta be driving Century 21 a little over the edge now. They, and the good folks who have been hosting the Airships to the Arctic symposiums for several years.

still..Boeing is a welcome addition to the field!

Hey thanks for that input do think you could get a copy of that picture and post it? I also just heard that Goodyear proposed a similar solution with four rotor back in the late 70s

regret to say I cannot post a picture. However, it might be found in Aviation Week archives. It was the issue of

(by the way, there may be some deliberate ¨skunk works¨disinformation in that sketch they provided. It showed a craft that looked a bit more like P-791. However, text of their announcement gave the impression that their airship, designed in secret over six years....was the size of "two soccer fields", and shaped as a delta similar to the B-2 bomber.

Pairing that bit of information, along with DARPAs' first solicitation for WALRUS airships, which were to have atmospheric ion propulsion...and you get some real credibility towards the NIDS "big black delta" secret airship proposed.

credibility must earned most specially if you are in material handling equipment.

the zeppelins were a good invention, but after the tragedy with the zeppelin that crashed they decided that it was too dangerous and in to some extend they were right, but it can be made more safetier

Pretty helpful material, much thanks for this article.