Some movies never get done aka (Zeppelin vs Pterodactyls) 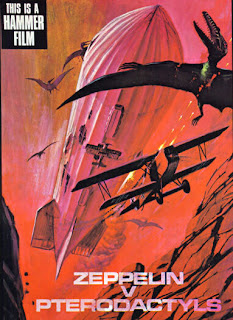 So this has been floating around the last few weeks in the blogosphere and I just want to mention it shortly. In the 1970s a Movie Company called Hammer Film was planing on putting out a movie about a Zeppelin stranded in a Lost World, where it had to fight dinosaurs. The Movie should have been called Zeppelin vs Pterodactyls. I don't know where I first had read about it but Airminded was one of the first I remember. Unfortunately movies that do not get made are not much of a help I guess. So why not looking at some movies that are actually available. The AIRSHIP Website has a nice page listing quite a few Airship - Feature Films, of which i have probably watched a maximum of one or two, but if you are looking into which movies to rent or get for the next video night that list might be a good start.
If you are more interested in upcoming films, to plan your trips to the movie theater, checkout "Stardust" or "The Golden Compass". Actually i have some video footage of His Dark Materials that I would like to share.
The first Video is a teaser Trailer I found on YouTube:

The second one is a very high quality Trailer that I am just going to link to since I don't want that people have to download huge amounts of data. It shows the Airship which can be seen in the movie a lot better than in the YouTube Video.
So go to this page to check the Theatrical Trailer
Again comes my question for discussion in the Comments, do you think the fictional airships pictured in those movies could actually fly? What would they need to fly, how much bigger would they have to be in the real world, what would have to be changed. Share your opinions with us in the comments.
posted by Andreas at 10:59 PM

You can watch the movie Zeppelin vs Pterodactyls at you tube