The Zeppelin NT - Number 4 is almost ready to fly.

We haven't treated you with new airship news for a whole week, how could we. But I will try to catch up a little on what was hot last week and what's hot this week. The most important news item for the industry was most definitely that the Zeppelin NT #4 is ready to fly. On Wednesday the Zeppelin was ready and waiting for the Helium. 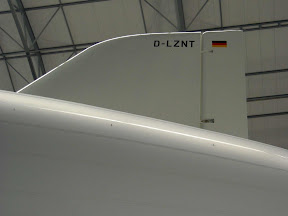 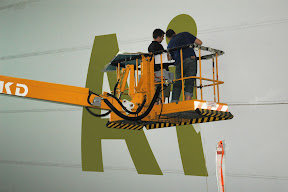 © Airship Ventures
Later on the Zeppelin got it's Artwork applied. Airship Ventures teased us with a picturethat was just showing the first two letters being applied by Airbornegrafix reading "Ai". Luckily SZON the portal of Schwäbische Zeitung released an article about the new Zeppelin featuring a picture of the full artwork. The complete artwork reads: "Airship Ventures - Going Places" we assume that the Artwork will stay on the Zeppelin until it reaches the US and the first Sponsor has been found. Even if the Zeppelin will fly until the end of June over Lake Constance. Plans are to fly in the Netherlands and Great Brittan until the Zeppelin is shipped around September 10th 2008. 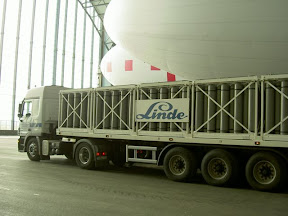 © Airship Ventures
On Thursday the 15th of May the Zeppelin was filled with Helium for the first time while being still suspended from the ceiling. Friday was the big day, the Zeppelin was put on the mast truck and the engines were fired up for the first time. As weather permits the Zeppelin NT #4 will hopefully fly for the first time some time very soon maybe this week. We will keep you updated but if you can't wait at all have an eye on the Airship Ventures Blog Up Ship! you should also head over to their Blog if you want to read a bit more in depth about what is currently going on in Friedrichshafen. If you are at Lake Constance and want to be our on site reporter let us know and we will forward you the time when the Zeppelin NT will roll out of the hangar and make it's first flight. A moment that should be captured on video and photo for the history books.
posted by Andreas at 8:45 PM

I'm willing to know how The Zeppelin NT - Number 4 could fly after this changes, maybe it would be better...

This blog post is really very pleasant as it is well written and has suggested a lot of useful aspects and information about the topic.