Airshipventures has done it. The Zeppelin NT will fly in San Francisco 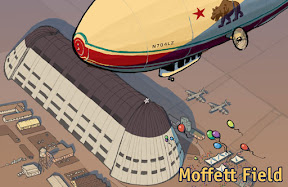 © Airshipventures
This circled the web already quite a bit and yes we are late in the game on this news item but hey I'm still not getting payed for this :-). But I love this work and thats why I do it. So to todays topic, the Headline says it.

Airshiventures the San Francisco company that had optioned the brand new Zeppelin NT Number 4 just completed the last and most improtant round of financing to get the Zeppelin NT to the US. The issued a press release that explained that they completed the Preferred Stock financing getting another 8 million US Dollars in investment. This now allows them to get the Zeppelin NT across the pond to the US. If the Zeppelin will fly or be shipped like the Zeppelin NT that was transfered to Japan has not been published. Fact is shipping the Airship has been proven to work for Japan and is low risk compared to flying across the Atlantic. On their Blog they mention the next steps that will be taken. The Zeppelin NT #4 will be ready to fly very soon. The Zeppelin will probably make a trip to London also mentioned here and then start it's journey across the Atlantic. The new Zeppelin Pilots will get training on the new ship and the route the airship will take across the US once arrived at the east coast. The Zeppelin NT can now finally come to the US after the FAA just approved it's Airworthiness Criteria. Check out the full text here. It took almost 8 years to complete the approval the first letter from the German Luftfahrt-Bundesamt was sent to the FAA October 1, 2001.

Airshipventures is still building up it's team so head over to their website and check out the current Job Offerings if you want to join this new chapter in history of a Zeppelin in the US, something that we haven't seem for some 70 years. And of course check out the excellent Airshipventures Blog called Up Ship! for some great inside scoop and infos not mentioned in the press releases. Here is the full text of the Press Release.
AIRSHIP VENTURES COMPLETES $8 MILLION SERIES A FINANCING - Upload a doc
Read this doc on Scribd: AIRSHIP VENTURES COMPLETES $8 MILLION SERIES A FINANCING

FOR IMMEDIATE RELEASE AIRSHIP VENTURES COMPLETES $8 MILLION SERIES A FINANCING Zeppelin Airship to Begin US Operations This Fall. Moffett Field, California — May 7, 2008-- Airship Ventures, a privately held corporation formed to bring Zeppelin NT airship operations to the USA, today announced that it had closed its Series A Preferred Stock financing on Monday with investments from six individuals. Terms of the financing were not disclosed. Brian Hall, President of Airship Ventures, commented “Achieving this significant milestone allows us complete our acquisition of the Zeppelin NT and to finalize preparations for commencing airship operations in the fall.” Airship Ventures, Inc, recently announced its move to Moffett Field in a partnership with NASA that will see the company using part of historic Hangar 2, built in 1942 to house Navy blimps. Alexandra Hall, CEO of Airship Ventures, said “We are thrilled to have found a group of people who share our vision of the future for airships in tourism, media and research.” Esther Dyson, the first outside investor in Airship Ventures, added “The best investments are ones where you can invest in something that probably wouldn’t happen otherwise. Without Alex and Brian’s passion and persistence, the Zeppelin would not be coming to the US. But I’m betting in a couple of years people won’t be able to imagine California without it.” ABOUT AIRSHIP VENTURES, INC. Airship Ventures Inc., founded 2007 in California, is a privately owned corporation formed with the objective of bringing Zeppelin NT airships to the USA for “flightseeing” tours, media and science mission operations. Initially based with one ship in California, the company intends to eventually have a number of airships throughout the USA. ABOUT THE ZEPPELIN NT AIRSHIP The Zeppelin NT07 airship, carrying up to 12 passengers, will be the largest airship flying in the US. At 246 feet in length, it is more than 50ft longer than the largest blimp. Using the inert gas helium for lift, and vectored thrust engines for flight, the Zeppelin NT has been flying with an unparalleled safety record since 1997, in Germany and Japan. ### Airship Ventures is a trademark of Airship Ventures, Inc. Zeppelin is a trademark of Zeppelin Luftschifftechnik GmbH. Airship Ventures Contact: Alexandra Hall, CEO pr at airshipventures dot com +1-650-969-8100 ext. 102

I want to thank Paul Boldt for finding the FAA Airworthiness Criteria.
posted by Andreas at 1:18 AM