The next generation Zeppelin what is it going to be ? 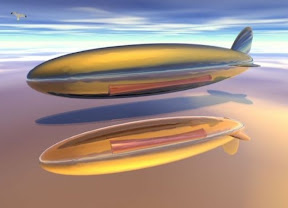 © Peter Wiermann
The Zeppelin NT is a great airship and currently the most advanced on the market. New concepts are in development like the Aeroscraft or the SkyCat but do they solve all the problems and are they the real next generation of Airships. Is the hybrid airship, which gets part of it's buoyancy through static lift and the rest through dynamic lift the solution, the be all end all? Should the next generation airship still have most of it's lift through static lift? One hull or two hulls ?

I have just found the blog Witigonen that has a nice article called Zeppelins, and Why they Kick Ass followed by a second article in the same Blog with the name Zeppelins today and potential alternatives both talk about the advantages of modern airships but also take a critical look at their efficiency compared to planes. The first article links to another interesting Blog post called Led Zeppelin from WebDiarios de Motocicleta the post analyzes the cost of a Zeppelin Ride from Boston to San Francisco. I haven't done the math in the post but the author made one mistake in that he based his calculation on the assumption that the Zeppelin NT can only carry 6 passengers instead of the 12 he can actually carry. The post links to a very interesting Technical Paper which goes into detail of the Zeppelin NT, it's speed, fuel consumption and payload. The paper was created by the Forschungszentrum Jülich which used the Zeppelin NT for atmospheric research. The most interesting part from a technical point of view starts with Appendix B on page 25. You can download the paper here. Having this technical information about the Zeppelin NT the question would be how does it really compare to planes. For example what is the fuel consumption of a 12 seater airplane? Per hour and how fast is it. And of course how does it compare to the most advanced new jets like the Airbus 380 and the Boeing Dreamliner? Can a Zeppelin scale linearly or exponentially.

Also looking at the endurance of Hindenburg and Graf Zeppelin there is a lot to do, the Zeppelin NT has a range of 900 km (500 nautical miles) and can fly for up to 24 hours. The Graf Zeppelin could cruise for over 100 hours and had a range of over 10.000 kilometers. So what would we need in order to construct a similar ship today? How can we advance the Zeppelin NT so that is is able to do a round the world flight? These are the current challenges of the airship industry. What do you think about it? Tell us your opinion in our forums or in the comments to this article.
posted by Andreas at 11:16 PM

The witigonen site has a tag for zeppelins so you can keep up to date with their posts.

In my opinion a whole world of opportunities will be opened (in many fields, not only air-ships) as soon as the new generation of photovoltaic cells are available.
These are going to be small, light, cheaper and more efficient than current technology.
they will cover almost any surface (windows, building, maybe even roads), and possibly could be used to cover the surface of a zeppelin to provide energy for electrical motors.

Along with the development of lighter yet stronger materials for hulls, I predict the zeppelins are to make a serious comeback in the next coming decades, being more cost-effective than airplanes, at least for certain conditions.

I will recommend my friends to read this. I am quite sure they will learn lots of new stuff here than anybody else!