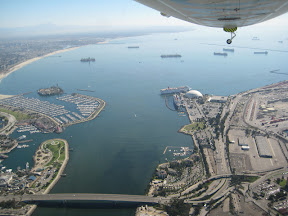 I work at a drug rehab in Oklahoma and yesterday I saw a fan powered vehicle flying around the campus. It looked pretty fun, something I'd like to try.

I'm not sure what the vehicle was called but since I don't get away from the drug rehab very often it's nice to know there is fun near by.

what a great shot of the airship. Its really amazing to ride something slow and enjoying the view below.

It is pretty how it looks since that point of view. I would like to have a ride.