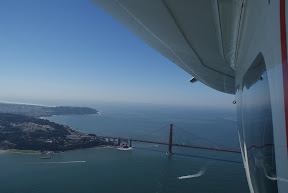 © ZLT
Zeppelin Luftschifftechnik has issued a press release about the Zeppelin NT #4 arriving in San Francisco. As aslways you get the English auto translation of the German press release and below the original German version.

Friedrichshafen / San Francisco, 29 October 2008 - The Airship Ventures to Zeppelin NT has been sold on Saturday, 25 October 2008, his home base Moffet Field after a total of four weeks traveling safely reached. This allows the passenger service on the Californian metropolis begin.

When bright blue sky overflew the Zeppelin NT from Lake to welcome the new home the Golden Gate Bridge, before he died on Saturday at fourteen clock time in Moffett Field / NASA Ames Research Center in Mountain View landed. Thus ended the airship under forfeiture of his four-week schedule transforming journey from Germany to California.

"We are very pleased with the safe arrival of our airship in the U.S.," said Thomas Brandt, director of ZLT, "Well, we wish Airship Ventures a good start and" many Happy Landings. " We support wherever we can. "Part of the Zeppelin from Friedrichshafen teams for several months operation in the San Francisco post. On next Friday, Airship Ventures is the passenger service on California record.

In Friedrichshafen, the Zeppelin NT yet to 8 November at the request of the climate on the road. FZJ investigated with the help of Topplattform on the airship the processes of self-air. From 10 November starts then the regular passenger service from Friedrichshafen.

ZLT Zeppelin airship GmbH & Co KG, has its headquarters in Friedrichshafen, develops, manufactures and markets the Zeppelin NT, a modern airships for a variety of uses. Zeppelin NT airships are meanwhile in Germany and Japan operated.
Deutsche Zeppelin Reederei, a 100% subsidiary of ZLT, the Zeppelin NT operating since 2001 for commercial sightseeing flights, advertising and scientific and industrial operations in Europe.