Pressrelease by ZLT about the Zeppelin arriving in the US 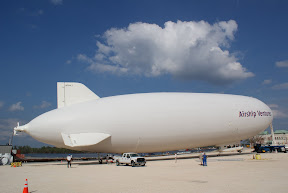 © ZLT
Zeppelin Luftschifftechnik just issued a press release about the Zeppelin arriving in the US. Currently only in German but the trusted Google Translate Service will make it possible for everyone speaking English to at least get the gist of it. Also there was a very nice high resolution picture of the NT attached to the release that I am happy to share. Just click on the Image for a larger resolution version. Below the auto translated Text of the press release and after that the original German press release.

Friedrichshafen / Beaumont, Texas, 14 October 2008 - The United States sold in the Zeppelin NT is after his Atlantic crossing from Hamburg in Beaumont, Texas arrived. The world's biggest airship was on a 162 meter long Dockschiff, the MV "Combi Dock I" in his new home shipped.

After its 15day voyage one of the world's three Zeppelin NT has arrived in the U.S. In the port of Beaumont was the blimp already discharged. After assembly and flight testing of the Zeppelin NT will be his new home, the historic Moffett Field in Mountain View, California fly. There are three of the twelve existing airship hangar.

During his trip, the Zeppelin NT Texas, New Mexico and Arizona to fly over before he reached California and the Rocky Mountains on the Banning Pass crosses. Shortly before his goal, the Zeppelin NT on the coast of San Francisco and the Golden Gate Bridge to fly.

Toward the end of this month is the new owner Airship ventures with Zeppelin sightseeing flights out of Moffett Field start. There are passenger flights to San Francisco, Silicon Valley, the Sonoma / Napa wine region and the coast of Monterey / Big Sur offered. Also, the airship with various technological and scientific specialty operations planned.

More information about the Zeppelin NT in the U.S. or the possibilities of a flight booking please www.airshipventures.com or call 001 650-969-8100.

Zeppelin NT in USA eingetroffen - Upload a Document to Scribd

Have you seen these pictures of pre-communist Russian airships?

I was delighted to find this web site.I wanted to thank you for your time reading this wonderful! I really enjoyed every bit of it and I've marked to ensure that the blog post something new.

Information you submit this really helps me, a lot of interesting things that I encountered after reading this article you wrote Cara Menghilangkan Benjolan Di Pipi
Terimkasih has written an excellent article for our read Obat Radang Pankreas Obat Kista Rahim
Continue to create other interesting articles that can be beneficial for everyone, nice to meet you and good luck always Obat Hidradenitis Suppurativa