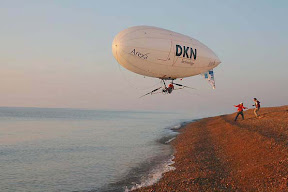 © Laurence Latour
The last weeks were filled with airship news. In fact there is so much more out there than I am able to write about but hey that's a good thing. So today is about the Zeppy airship by Stephane Rousson. He recently created quite the media buzz with his attempt to cross the English channel with his airship. Unfortunately he had to cancel because of to strong winds. This is what AFP reports:

LILLE, France (AFP) — A Frenchman planning to fly across the Channel on a pedal-powered airship, a world first, was forced to call off his crossing due to high winds Tuesday, his team said.

Stephane Rousson, 39, had intended to leave Dungeness beach in southeastern England before dawn on Tuesday for the five-hour, 55-kilometre (33-mile) journey to northern France.

But dangerously strong winds forced him to postpone the adventure, a team member said. No date had yet been announced for a new attempt.

It took Rousson, a qualified pilot and extreme sports enthusiast, four years to prepare for the crossing.

His 16-metre (52-feet) long airship is designed to glide 30 metres (100 feet) above water, with the pilot in semi-reclining position underneath, steering it with two propellers on either side of the pedals.

In 1979, US cyclist Brian Allen made the same crossing on board a pedal-powered aeroplane.

But to really get the inside scoop about the project you should dust of your french and read the Blog "Voyage à la lisière de l'Utopie" it chronicles in great detail the whole project with some really great pictures videos and behind the scenes stories. In case you aren't able to make sense of all the french on the Blog Google Translate comes to help here the link to the autotranslated version of the Blog.
Some highlights are of course the YouTube Videos.
and the Slideshow (this is a WMV Video which will download and then play in Windows Media Player) witch pictures of the attempt.

Last year Stephane Rousson was involved in the Theolia Windream One Project, making the attempd to cross the Atlantic with a small 2 person airship. To learn more about the Windream One go back to our previous posts. The Windream One website seems to undergo a change currently and there haven't been any news from the project since mid 2007. Searching the web we also could not find anything about the current state of the project. If you know something let us know send us an email or post in the Forums.

When I read about the reasons why the attempt failed I stared to wonder. The AFP article mentions "dangerously strong winds" were the reason why Stephane Rousson had to cancel. Which brings me to a thought why do airships always have to fight winds, why are winds something bad for airships? Could we not construct an airship that would use the winds instead of fighting the winds? Could a sailing airship be constructed? An airship that uses kite sails to steer? Maybe an upside down sailing ship? Is it possible has it been tried? Having an airship that works more like a sailing ship which uses it's propellers just for low speed maneuvering. What do you think?
posted by Andreas at 10:02 PM

Unfortunately, I don't think a kite airship design would work so well. You have to have some sort of resistance against the kite's pull. Kite boarders dig into the water with their boards, buggy riders have the resistance of the wheels on the ground, and ships have their keels preventing them from just being dragged through the water. What would accomplish this on an airship?

Hello Daniel,
thanks for your comment I just wrote another post about it. I think there are possibilities they just have to be taken.
But maybe it's really to difficult.

Back in college (1980) I reada book which advocated an airship/kite design which drug a "keel" through the water. Similarly, you could run cables to a railroad car. A much more far out idea would be to have two kites, one in a wind stream going in one direction and one at another level in a windstream going in a different direction. The resultan difference in force vectors could be used to steer the airship.