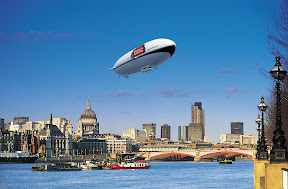 © ZLT
After the word had leaked in April that the Zeppelin is coming to London. We now have the official Press Release by Zeppelin, confirming it and giving us lot's of background info. Unfortunately the press release is currently only available in German we took the time and translated it for you. Also we dug out some more interesting stuff, that you should mark in your calendars. So let's move to our english traslation of the press release with all the important information in it:

Friedrichshafen, 09. June 2008, - This Summer - Londons first commercial Airshipmission. ‚Stella Artois: Star Over London’ will give you a unique birds eye view of London for six weeks.

InBev, the brewery of Stella Artois, Englands most favorite Premium Lager-Beer, has announced today, that they will be the sole Sponsor of this first commercial usage of a passenger airship, which will offer flights over London for 6 weeks this summer. People will have the possibility to experience the unique view on board the ‚Stella Artois: Star Over London’ for the first time since the invention of the airship.

Stuart MacFarlane, president of InBev UK notes: „Stella Artois is a synonym for quality, tradition, pioneering spirit and the art of brewing. These are the qualities that we want to highlight with this project. We are happy to offer Londoners and toursist the opportunity to enjoy such an unforgettable unique experience on board the ‚Stella Artois: Star Over London’.“

„This mission is a premiere and the first possibility for toursim roundtrips above London in a Zeppelin airship. We are proud that our Zeppelin NT can celebrate his debut for passenger flights over this one-of-a-kind metropolis in Europe and we hope for regular missions in London in the future“ says Thomas Brandt, CEO of the Deutsche Zeppelin-Reederei GmbH.

Discover the metropolis of London from above - starting 10th of July 2008. The ‚Stella Artois: Star Over London’ will be stationed in Damyns Hall near Upminster in the northeast of London until August 21st. From there it will start it's roundtrip flights across the Skyline of London. There will be an average of 5 flying hours per day with a maximum of 12 passengers on board the ‚Stella Artois: Star Over London’ on 3 different routes above Londons most famous sights.

The event is conducted through The LZC, Ltd. in London. The airship is operated by the Deutsche Zeppelin-Reederei GmbH, a subcompany of ZLT Zeppelin Luftschifftechnik GmbH & CO KG.

Also there are already a few articles on the web also focusing on the Zeppelin in London check them out Also have an eye on http://www.staroverlondon.co.uk this will be the official website but isn't established it yet. That's it for tonight send us your comments as always either via email or as comments on the Blog or in the Forum. Have fun
posted by Andreas at 11:24 PM

i hope she gets the chance to visit Cardington, the first zeppelin visit at Cardington was in 1930 in the Graf so we are due one and it would be a fantastic photo opp, some zeppelin dignitaries could nip in to hybrid air vehicles for a visit too.

Hi,
I did not find a way other commenting to contact you. I run a military aviation blog not art related like yours but more of a info related. please visit my blog http://dailylark.blogspot.com/ I would like to have link exchange with you that way we both will be profited . Please visit my blog see me email in it and contact me. Hoping for a positive reply.

Thanks for such an interesting article here. I was searching for something like that for quite a long time and at last I have found it here..