Airship Management Services Skyship 600 to Patrol the coast of Florida

This year seems to be a very successful year for Airships. After many posts about the Zeppelin NT in the last few weeks and months, we are now happy that the Skyship that was previously in the news as the Ron Paul Blimp and also made a little trip to Trinidad & Tobago is now heading for a mission to protect the coast between Florida and Cuba. Airship Management Services will be working with theUnited States Coast Guard please read their press release here:
Airship to Patrol South Florida Straits - Upload a Document to Scribd
Read this document on Scribd: Airship to Patrol South Florida Straits

Airship to Patrol South Florida Straits KEY WEST, Fla. -- The Navy, in coordination with the Coast Guard and the recently created National Office of Global Maritime Situational Awareness (OGMSA), will conduct a six-week-long series of evaluations off Florida's southern coast of an airship in a maritime surveillance role this summer. Several recent studies have indicated the utility and potential cost effectiveness of airships in this role. This demonstration is an effort to examine the subject further. The lighter than air platform will fly patrols for up to 8 hours to test both the systems and crew mission loading and fatigue factors. The airship, a Skyship 600, which is owned and operated by Airship Management Services, Inc. (AMS) and leased by NAVAIR PMA-262, Patuxent River, MD, was configured for this mission with the assistance of the Naval Research Laboratory, Washington, DC. It is manned by a three-person crew, including two pilots and a crew member. They will receive operational, technical and administrative support from both Coast Guard Sector Key West and Naval Air Station Key West . AIRSHIP FACTS The Skyship 600 is a 6,797 cubic meter (240,000 cubic feet), helium-filled airship. Over the years it has proven itself an excellent platform for a variety of missions. Capable of persistent surveillance, communications relay, data-gathering, scientific monitoring and sampling, or test and evaluation of new equipment, the long endurance of the airship allows it to remain on station far longer than helicopters while providing a solid, vibration free platform for equipment. The airship is also a very cost-effective airborne platform for sensor applications. The ability to deploy to an area of operation, lift a sizeable payload and provide a stable platform for sensors with long endurance is unique among most airborne vehicles. Boasting a large cabin, which incorporates a lavatory, the Skyship 600 can carry a wide range of equipment and its operators (or up to 12 passengers). It has been demonstrated that the ship can provide endurance for up to 52 hours without refueling. Furthermore, the use of safe, non-flammable helium keeps fuel consumption very low and the airship environmentally friendly. The Skyship 600 is also one of the safest forms of transport in the world. The Skyship 600 is operated by a crew of 20 personnel consisting of two pilots, three engineers and 15 ground crew who bear responsibility for all aspects of the safe and effective operation of the airship. While on the ground, the ship's systems are monitored by a watchman located at the airship at all times. The joint airship experiment for maritime surveillance between the Navy and Coast Guard reflects the cooperative strategy for 21st century seapower between the sea services. The Chief of Naval Operations and the Commandants of the U.S. Marine Corps and U.S. Coast Guard unveiled the cooperative maritime strategy at the International Seapower Symposium in Newport, R.I. on Oct 17, 2007. The strategy will bring the Navy, Marine Corps and Coast Guard even closer together in working to protect and sustain the United States. _____________________________________________________ Guarding the coast and saving lives since 1790 -- the United States Coast Guard. More than one million lives saved.

Reuters also featured an article about the Skyship 600 on their website. The article is called "Blimp joins anti-smuggling patrols off Florida" and offers a little bit more background. Airship Management Services who are owning and operating the Airship were kind enough to send us a few pictures of the Airship as it leaves the Hangar showing clearly the Furuno Radar Antenna that is being used to patrol the coast. This project will hopefully prove again that airships are perfect for surveillance and patrolling. 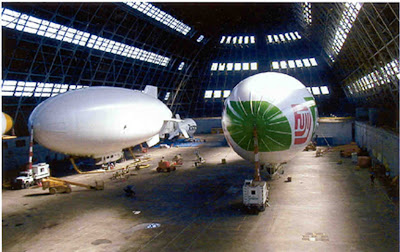 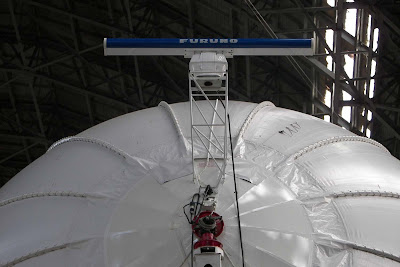 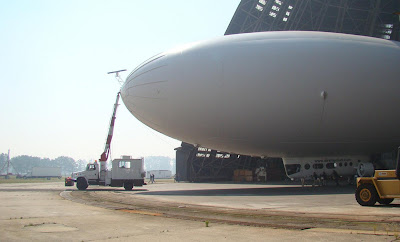 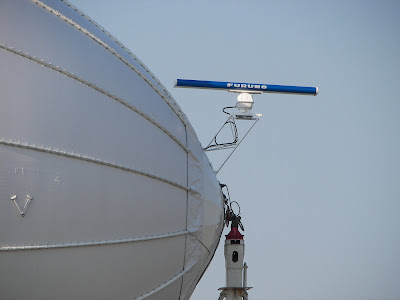 I live in Key West and saw the Skyship 600 fly along our southern shore on July fourth when there were thousands gathered for the fireworks to be blown that night.
It was a nice sight as it cruised by at about 40 knots.
The ship was also on page one of our local paper a few days earlier. The photo showed TWELVE ground-handlers running toward the landing ship. Twelve. Which proves that this airship is unfortunately, too expensive to operate for commercial applications.
The airship world is in dormancy until a variable-buoyancy ship like the VARIALIFT design is completed and proven.
Allen Meece in Key West

Does anyone know how much such as ships is to buy?

I've been looking for the results of this trial balloon and haven't found any on the internet.
It feels like the Coast Guard and the Navy weren't too excited. I can think of reasons why not.
1, the blimp only operated in daylight as if smugglers don't sail at night.
2. the blimp speed was about 50 knots and endurance was six hours. That makes a 300 mile track of searching for smugglers in a days operation. That's a small area compared to a 150 knot helo or more for an airplane.

I wish them well but don't think they ran the test the best way. The blimp should've loitered for days on station and caught everything that passed by.

so beautiful airship wow like for a surprise somebody you really love with some romantic phrase!

Hello, I am very happy to read your blog. This is another fantastic blog post what I have read.