The Zeppelin NT#4 is in Cardington 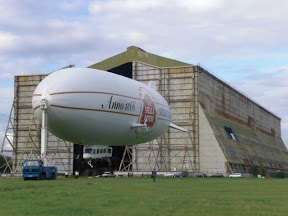 © Airshipventures
We had mentioned in one of our previous posts that the Zeppelin will be in Cardington before starting on it's cruise to the Netherlands. This is the first time since 1930 that a Zeppelin visits Cardington according to John Christopher from Zeppelintours. The Zeppelin arrived safely from London on August 21st at 17:38 according to Alexandra Hall from Airship Ventures
The Zeppelin is scheduled to leave Cardington on Wednesday. There was a press presentation scheduled on Tuesday according to Arnold Nayler,donät know if it happened.
As soon as the Zeppelin arrived in Cardington it was brought into the hangar and the Stella Artois branding was removed and replaced. Who is the new sponsor? We don't know but maybe this picture and this one allow for some speculation. The Zeppelin will fly from Cardington to the Netherlands and will then be transported with a Ship called Combi Dock 1 to North America. To read more about the Ship go to the Combi-Lift website check out the 3D presentation it's quite impressive. The ship will probably leave from Rotterdam or somewhere close to Rotterdam, since this is where the Zeppelin will be flying to in the next week. The question then remains were will the Zeppelin arrive in the US. According to Ryan Myers from "The Beaumont Enterprise", the Zeppelin will arrive at the Port of Beaumont around September 26th will then fly from the port to Southeast Texas Regional Airport, stay there for about 3 days before flying to San Francisco. This information is not confirmed by Airshipventures so pure speculation and rumor at this time. Here are the two articles that Ryan Myers wrote: Article 1 and Article 2
And last but not least Alex Hall from Airshipventures was interviewed on NHPRs Word of Mouth on August 4th. You can listen to the interview by going to the website and downloading the MP3 file of the radio show. Fast forward to Minute 25:30 where the whole 10 Minute interview starts.
Jump over to the Airshipventures Blog to get lots and lots of pictures of the Zeppelin in Cardington.
If you like our Blog please subscribe you can do so via email or in a feed reader like Bloglines. Subscriptions are of course completely free and you get new articles automatically delivered to you. Also let us know what you think of us and our articles send us an email to airshipworld at gmail dot com or leave a message in the comments. You can also participate in the Forum and exchange your thought with other readers.
posted by Andreas at 8:49 PM

Very significant article for us ,I think the representation of this article is
actually superb one. This is my first visit to your site

Wow, there is a great deal of effective material above!