Zeppelin now longer in Rotterdam, later in the US 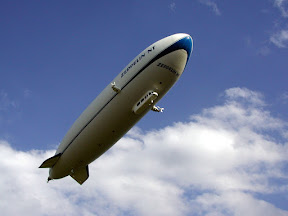 FOR IMMEDIATE RELEASE Zeppelin NT Rotterdam passenger flights extended in Friedrichshafen, August 27th 2008 – Deutsche Zeppelin-Reederei GmbH today announced it will extend passenger operations in Rotterdam with the Zeppelin NT recently sold to the US firm Airship Ventures, until September 21st 2008. The shipment to the US will be postponed for approximately two weeks. Immediately thereafter, the airship will travel to its new home in the United States, where it will be operated in the San Francisco bay area by owner Airship Ventures. The operation of the new Zeppelin NT over Rotterdam will be extended an additional two weeks. Last year a Zeppelin NT from Lake Constance was part of an art project in the Netherlands and has performed passenger flights with big success. The rescheduled departure to the USA now allows for a longer tour over Rotterdam, meeting this years demand for passenger Zeppelin tours. Reflecting on the extended tour, Erwin Krijger of Aerwin Technologies commented: “Having organized the first-ever commercial passenger operations of the Zeppelin NT in the Netherlands, we encourage residents and tourists alike to take advantage of this rare opportunity to experience the sights of Rotterdam as never before – by airship!” The Zeppelin NT will be stationed at Rotterdam airport and offers 40 and 60 minute passenger sightseeing flights from September 8-21, 2008. Aerwin Technologies Ltd. will be DZR’s partner for this operation. Further information is available on the Internet at both www.zeppelinflug.de and www.zeppelinvlucht.nl or by calling Aerwin at +31 70 301 2700. About Deutsche Zeppelin-Reederei GmbH Deutsche Zeppelin-Reederei GmbH is based in Friedrichshafen and operates the Zeppelin NT for commercial air tours, advertising and scientific missions in Europe. Zeppelin NT airships are currently operating in Germany and Japan. Deutsche Zeppelin-Reederei is a wholly owned subsidiary of ZLT Zeppelin Luftschifftechnik GmbH & Co KG. ABOUT THE ZEPPELIN NT AIRSHIP The Zeppelin NT07 airship, carrying up to 12 passengers, is the largest airship flying in Europe. At 75 meters in length, it is more than 15 meters longer than the largest blimp. Using the inert gas helium for lift, and vectored thrust engines for flight, the Zeppelin NT has been flying with an unparalleled passenger safety record since 1997, in Germany and Japan. ### Press Contact Deutsche Zeppelin-Reederei GmbH: Kathrin Runge Tel.: +49 7541 5900 547 presse@zeppelin-nt.de www.zeppelinflug.com Press Contact Aerwin Technologies Ltd. Erwin Krijger Tel +31 70 301 2700 krijger@aerwin.nl www.zeppelinvlucht.nl

I really loved this post. You write about this topic very well. I really like your blog and I will definitely bookmark it!