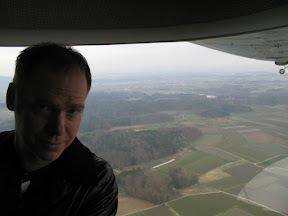 © Scott Westerfeld
Scott Westerfeld a bestselling author of science fiction and young adult literature is currently researching for his new trilogy called Leviathan. In a interview with teenreads.com he gave a short description what Leviathan will be about:

It's a new trilogy called Leviathan, which is set in an alternate 1914, at the beginning of the Great War (what we call World War I). It features living airships, walking mechanical war machines, and loads of romance. Plus, it's going to be heavily illustrated by a brilliant artist I've found, almost halfway to graphic novel.

If you want to write about airships you must have experienced them, that's why he is currently on a research tour in Europe and visited Friedrichshafen a few days ago. Of course he took a ride in the Zeppelin NT and describes his experiences in a series of great to read Blog posts.
In his first post called Z-Day he takes us around Friedrichshafen and the omnipresent Zeppelins you see on every corner. His second post appropriately called Z-Day 2 invites us to follow Scott along on his trip, featuring pictures from the Hangar, the landing of the Zeppelin, some videos, aerial shots, pictures form inside the zeppelin and even a picture of the cockpit. It's a great read for every airship fan. And the second post was not the last one. Check out Scott Westerfelds Blog where he will post the third part of his report soon. Also check out his Website scottwesterfeld.com to find out more about him and his books. I am looking forward to the Leviathan trilogy it will be one more series of books that will inspire young readers to learn more about airships.
posted by Andreas at 8:00 AM