Brazil priest carried away by balloons 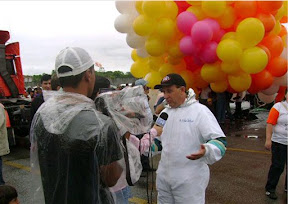 © The Associated Press
Daveg from the Airship-List pointed out a news story about a Brazilian priest that wanted to break a 19-hour record for the most hours flying with balloons to fund a spiritual rest stop for truckers in Paranagua, home to Brazil's largest grain port. The Associated Press reports in their story that the priest after 8 hours of flight and loosing contact to the authorities. He was equipped with GPS and a satellite phone and there is still hope to find him. He started his flight on Sunday April 20th. AP also featured this video on YouTube showing the priest flying away with hundreds of helium balloons.
Priest Goes Missing During Balloon Flight
To read more about the story go to Google News for the Full Coverage.
posted by Andreas at 8:58 PM

Brazil is a great country with strong culture models. Great post. keep doing the work in this pace.

I'd heard rumors about this but now I see it was for real! Reminds me of a movie I saw "Danny Deckchair" about an Aussie who did the same thing.

Priests should do their jobs and not doing anything else.

Flying priests are just going home. they should tend to their flock and leave the earthly things to us the mortals.

Well I have read about it earlier, but the funniest part is how can a person be carried of by balloons and that too a priest of his kind.

what happen if the balloon looses air and balance ? so what happen next ?

You did really a great job. I found your blog very interesting and very informative...

the site is really wonderful. i do appreciate the video too. love the post.